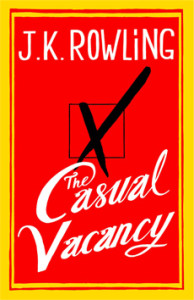 The novel starts with the surprise death by aneurysm of the merry, compassionate Councillor Barry Fairweather. A small man with a neat beard he dies on his wedding anniversary outside the golf club where he was going to dine with his wife Mary. The ‘casual vacancy’ his death creates on the Parish Council opens up a Pandora’s box of greed, lust, envy , racism, snobbery and political shenanigans of every stripe. Pagford clearly has a dark underbelly and this darkness is going to be explored through every possible angle as we follow one character after another who is intent on promoting their own family, or their own interests, above everyone else’s.

I haven’t read the Harry Potter novels but I have seen the movies, so know that Rowling is a dab hand at mythically proportioned good versus evil battles. This novel is also concerned with good versus evil but (fittingly for an adult novel) it is not always clear where the battle lines are. Having said that, it is fair to say that most of the adults are pretty damn evil and most of the teenagers have an evil streak. The issue really is how forgivable the evilness is in each character. In some it is unforgiveable: the two most horrible characters are Simon Price, a violent, bullying husband and father who works at the local industrial plant, and Shirley the wife of Howard the current head of the Parish Council. Simon Price’s bullying of his teenage sons and his creepy, obsequious wife is as awful as domestic violence always is, but Shirley’s smug middle-class awfulness is drawn with particular venom. (Rowling really really hates smug middle-class.) In Potter movie terms, Shirley is like Dolorous Umbridge as played by Imelda Staunton (the perm, the fake smile, the maternal bosom under which beats a sly, loveless heart). Shirley is a volunteer visitor at the hospital (so she can rubber-neck); the Grim Reaper might be a more welcome sight coming down the corridor.

The other adults are, almost without exception, also deeply flawed, but in varied and interesting ways. For example, there’s the deputy headmaster with OCD who carries books around everywhere in case he touches a student inappropriately. He is terrified that he might, in some unconscious way, have killed Barry Fairweather (it is a fascinating account of OCD and has been praised). There’s the tense, brilliant Sikh doctor who was a close friend of Barry’s, she is also on the Parish Council, caught up in her own grief, she is oblivious to the suffering of her bullied and self-harming daughter, Sukhvinder. (Sukhvinder, a gentle troubled teenager, is the closest the novel has to a heroine.) There is Gavin, the commitment-phobe lawyer and his desperate on-again off-again social worker girlfriend, Kay, and there’s bored, middle-aged Samantha who likes to get drunk and lust over the young men in her daughter’s boy-band DVDs.

Okay, the adult characters are not drawn with particular subtlety, but they are fascinating and, mostly, believable. In any case, their overdrawn flaws and failures help move the plot along at a right steady old clip.

Now the young adult characters. They are magnificent. Perhaps because all characteristics are magnified in adolescence anyway, their negative traits do not seem overdrawn in the same way. They are a lustful, inarticulate, insecure, angry, selfish and confused bunch. There’s Andrew Price, driven crazy by his hopeless lust for beautiful new girl Gaia and scarred by acne and a black hatred of his father. There’s Fats, his best mate, a young man on a quest for personal authenticity via degradation and betrayal. There’s Krystal, the damaged, valiant, hot-headed daughter of a heroin-addicted mother and there’s quiet Sukhvinder, pulling her sleeves down in class to cover her scars, ashamed of her body, the silent victim of Fats’s Facebook bullying campaign. With the young people, because they are young, there is a tail’s twitch of hope. And you’d better appreciate it, because there’s not a lot of hope in this sad, sad book.

The Casual Vacancy is probably not high art, the writing has been criticised for its lack of finesse (too many adjectives, too much “his stomach churned’ type writing). The parts of the book about the drug-addled inhabitants of the poverty-stricken sink estate have been accused of caricature, and the ending has been accused of being too bleak.

There may be something to all the criticism. But to me The Casual Vacancy is a brilliant page-turner and reading it I felt just like those kids you used to see, nose deep in Harry Potter and the Half Blood Prince; I was immersed, mesmerised.

All this and a vicious critique of contemporary Britain too!

I just wish she’d turned the hope dial up a bit.

PS Keep the book away from children! It has explicit sex and violence, loads of swearing, and drug and alcohol abuse is depicted in detail. I know: who would have thought?