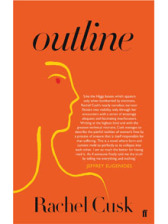 Before the flight I was invited for lunch at a London club with a billionaire I’d been promised had liberal credentials.

From this, the first sentence of Rachel Cusk’s Outline, I was hooked. It is an engrossing, mesmerising and transcendent read. Trippy, in the best way. Outline made me want to go to Greece to drink inky coffee in hot, dark cafés, being talked to by self-absorbed but interesting artistic types with strong views and good stories.

The plot is a thin, straight line: the narrator – an author and divorced mother of two – goes to Athens to teach a creative-writing course for a week. Each person she meets (a Greek businessman, an Irish writer, an old friend, a publisher, a poet) and each of her ten students tells a story about their life.

You can read the book quickly or slowly.

Read quickly, Outline is a series of perfectly-formed, gossipy, engrossing vignettes of other people’s lives. There are stories about failed (usually in interesting ways) marriages, a couple of stories about domineering or favoured siblings, a couple of stories told by reformed Stepford wives and a story about a brutal battle with the family dog which comes to personify the drudgery of ‘women’s work’ for one of the characters. (Incidentally, this last story is a chilling cautionary tale for anyone thinking of getting a cute little puppy ‘for the children’.)

The unattractive character traits revealed by some of the stories are drawn to our attention by the narrator without comment. We see naked ambition, envy, self-absorption. Many of the male characters talk at length about themselves and either forget or only cursorily ask the narrator about herself “What about yourself,” asks the Irish writer after his lengthy monologue, as the narrator gets up to leave, “are you working on something?” Cusk makes her points gleefully but gracefully, gesturing with a gloved hand.

Cusk is great, too, on the pitfalls of the grass-is-always-greener illusions many of her characters live by. They either leave one relationship to find out what else is out there or envy the lives they imagine others to have, thereby not living their own lives and not ‘seeing’ other people, only their illusion of them. This is a recurrent theme and is always niftily illustrated (for example, the narrator is swimming in the sea off the Greek businessman’s boat and, watching a perfect little family on another boat, she sees “a vision of what I no longer had: I saw something, in other words, that wasn’t there.”)

Read more slowly, the book is shimmery and deep. A meditation on family relationships, marriage, work and the role of women. Every story told by every character is worth putting the book down for and having a think about. What is she saying here? Do I agree? This takes a long time; Cusk is not dealing in black and white. Everyone’s story has something to it when you see it from their point of view.

I’ve enjoyed all Rachel Cusk’s books but am particularly and excessively fond of her personal memoirs. She’s written three: A Life’s Work (her experiences of motherhood), The Last Supper (a spell living in Italy) and Aftermath (her experience of separation). She is such a good writer and observer. She makes me want to take more notice. A Life’s Work and Aftermath received shedloads of negative comment. The first book was attacked by mothers’ groups (and some critics) and the second by critics who levelled charges of selfishness and narcissism at her. I don’t get the criticism. No one ever said that these works were badly written. And Cusk herself never said she was writing instruction manuals for how people should live their lives.

Outline is not a memoir but is at least partly (how much? I don’t know) based on Cusk’s own experience teaching a course in Athens. It seems to have attracted only high praise, almost awe, in the critical press. It was serialised in the Paris Review.

To sum up Outline: catnip for the brain.