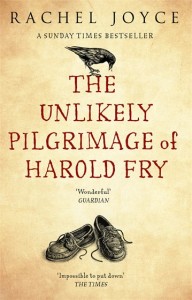 He walks up the country in the yachting shoes he was wearing that first morning, getting them resoled when necessary.  He has none of the right gear but is given bits and pieces by strangers; a compass, a rucksack.  After the first few days he posts his credit card back to his wife Maureen; he will rely totally on what he finds or is given ‑ or do without.  He grows a beard.  He meets lots of people.  A dog (‘Dog’) attaches itself to him.  His journey briefly becomes front page news and he gets followers.  Dog leaves him.  He leaves the followers, sneaking away from their camp one early morning.

While Harold keeps on walking towards Queenie, his wife, Maureen, left behind in an empty house, has to be content with regular but confusing phone calls.  Their relationship had deteriorated (for sad reasons which gradually become clear) and they had been living together like two strangers, sleeping in separate rooms and barely talking.  While Harold is walking, Maureen goes through her own journey: anger, confusion, embarrassment, fear ‑ until she reaches the point where she just misses him and realises how much she loves him. (Put like that it sounds soppy, but it isn’t.)

Okay, so Harold is a humble saint-like character.  Honest, self-mortifying, renouncing worldly possessions, embracing society’s misfits and rejects.  He is a sponge with a large ear, listening to people’s stories and simply absorbing them with no judgement.  The point of the book seems to be that his torments and the torments of those around him are just versions of the burden every human bears.

It must be the same all over England [Harold thought].  People were buying milk, or filling their cars with petrol, or even posting letters.  And what no one else knew was the appalling weight of the thing they were carrying inside.  The inhuman effort it took sometimes to be normal.

Despite the serious message, the book is not a dense and pious tome.  It’s plainly written and (often) gently funny.  You get the same feeling you do with children’s quest/adventure books: celebration when Harold gets a blessed heel of bread to chew on, some cold water to slip down his dry, rasping throat, the sheer bliss of getting those painful blisters tended to by a kind but feral Slovakian doctor working as a cleaner.

Maureen was my favourite character.  Pursed-lipped and withholding, at first she’s a nightmare of sour, neurotic old person-ness.  But she grew on me.  She has some playful, dreamy moments.  (Though think Coronation Street on a quirky day, not Amélie).  Alone in the house, she gets frisky with the couple’s wardrobes, looping her clothes through Harold’s and leaving them around the house, like they’re dancing together again.  Fear not, though, despite tentative steps towards whimsy Maureen will never be a manic pixie dream girl.  A few quotes will make it clear why:

“‘There are many ways I can help,’ said the young [public relations girl seeking to represent Maureen as Harold starts to get famous].  [The girl] mentioned emotional support, breakfast television interviews and invitations to B-list parties, ‘You only need to name what you want and I can fix it.’

‘That’s very kind but I’ve never been a party animal.’  Some days [Maureen] didn’t know which was madder: the world inside her head, or the one you read about in the papers and magazines.  She thanked the girl for her generous offer. ‘I’m not sure that I need help, though.  Unless , of course, you do ironing?’ ”

[Harold] was so bewildering to her, this man who walked alone and greeted strangers, that in turn she said mildly high-pitched things she regretted about bunions, or the weather.

I smiled, I teared up.  I had my “That’s so true!” moments.  I was a little complacent for a time, then I was unexpectedly worried.  By the end I was both  sad and happy.  The Unlikely Pilgrimage of Harold Fry is an unlikely rollercoaster of a read.  It was longlisted for the Booker Prize in 2012.  I liked it a lot.  I will definitely read Rachel Joyce’s latest book, Perfect.