Hey Yeah Right Get a Life by Helen Simpson 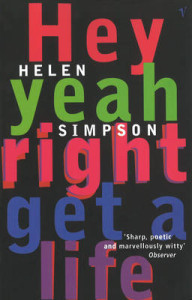 A small preliminary rave about Helen Simpson.  She’s an English short story writer with a low output (one slim volume every five years) who writes smart, funny, sometimes bitter, sometimes life-affirming short stories about normal people living normal lives.  Her preoccupations are intimate, domestic, personal: motherhood, housework, relationships, friendships, work, work/family balance – but her themes are universal and political.  Apparently Helen Simpson invented mummy-lit, but if that is so, then it’s only in the same way that Jane Austen invented chick-lit.

Hey Yeah Right Get a Life opens with Lentils and Lilies in which we meet Jade Beaumont, a teenager home from school on a study day, upstairs in her bedroom thinking about her summer tan and Samuel Taylor Coleridge (but mainly her summer tan).  She’s gazing out her bedroom window upon the street below. In every fibre of her being she’s aware of her growing power: “every day when she left the house, there was the excitement of being noticed, the warmth of eyebeams…she was the focus of every film she saw, every novel she read…”  Jade knows what end is up; she fingers her certainties like beads in her pocket. Here she is walking down the boring suburban road in front of her house:

She was never going to go dead inside or live somewhere boring like this and she would make sure she was in charge at any work she did and not let it run her.  She would never be like her mother…with her tense talk of juggling and her self-importance about her precious job and her joyless ‘running the family’.

Turning a corner (while scoffing at materialism for good measure) Jade comes across a screaming child and a numb, panicking mother.  The child has stuck a lentil up its nose.  Jade is roped in to help by the frightened, lumpen mother.  There’s tweezers, snot.  More screaming. Jade escapes as soon as she can, back into her spring day, onwards to her glowing future.

Each story stands alone but some are linked. In the next story (the title story) Jade is babysitting for Dorrie, another lumpen, exhausted mother.  This story is told from Dorrie’s perspective. Dorrie is going out on a dreaded date night with her unsympathetic husband.  She opens the door to babysitter Jade:

Sounds like I’m a bit early” said Jade, “No, no, let me show you how to work the video, that’s just the noise they make on their way to sleep,” said Dorrie, feeling herself bustle around like a fat dwarf.  It seemed pathetic that she should be going out and this lovely girl staying in.  The same thought had crossed Jade’s mind, but she had her whole life ahead of her as everyone kept saying.

In an unlinked story, Cheers, middle-aged Lois is catching the Tube into the city, to meet a friend, Holly, for a Christmas catch up dinner.  She loves going out, being out and about, “talking about something outside herself.”  She glances “appreciatively at the strangers around her all ages and sizes..”   There’s an incident with a drunk and a knife.  No one gets hurt, but it’s nerve-wracking.  At the restaurant, Holly gets progressively more maudlin as the wine bottle goes down.  Holly’s lover’s wife won’t grant a divorce and Holly thinks the wife is being utterly selfish.  Lois disapproves of Holly’s attempt to gain the moral high ground in such a messy situation, but doesn’t let on, instead she is gruff but affectionate, pushing Holly into a taxi with a hug at the end of the night.  She herself catches the night bus home only to find herself lumbered with a drunk stranger who gets off at the same stop and can hardly walk, never mind say where she lives.  Lois drags this drunk stranger down the road, trying to make her look up and identify her house.  There’s vomit.

Somehow, weirdly, Cheers is an uplifting story.  On her way into town at the beginning of the night, Lois had been reading a Christmas card from friends announcing they were moving out of town to a lifestyle block.  Lois had thought this was a mistake:

The main thing, thought Lois, looking out the window at south London’s back gardens, the important thing as middle age came and sat down on you with its enormous bum, the vital thing surely was not to grow too careful of yourself….[It was no good them] trying to twitch their coat hems away from the rest of humanity.

Even if, as in Lois’s case, your coat hem ends up covered in some drunk stranger’s vomit.

Other stories are about opera, a shopping binge, rampaging bankers celebrating Robbie Burns night and the adorable Dorrie’s summer ‘holiday’.

Hey Yeah Get a Life has got something for everyone and is insanely readable.  (That’s why this review is more quote than review.)  It’s a slim book with a cool cover.  It would fit nicely in your pocket for that next train/tube/tram/night bus ride home.