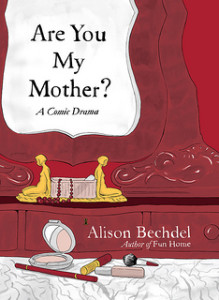 Alison Bechdel wrote a long-running comic strip called Dykes To Watch Out For and published a graphic memoir called Fun Home: A Family Tragicomic in 2006.  Are You My Mother? is a sort of sequel to Fun Home.

Two interesting things before I get started on Are You My Mother?  First, Alison Bechdel is semi-officially attributed with establishing the ‘Alison Bechdel’ test for the way films portray women.  To pass the test a film must satisfy three requirements:

Cool test.  Apparently it has been adopted as an actual rating system in Sweden.  But.  I went to the Wellington Readers and Writers Festival recently and heard Bechdel speak and she said that, while this ‘test’ did come up in a story line in one of her Dykes To Watch Out For comic strips, she didn’t invent it.  Virginia Woolf did and it’s from A Room of One’s Own (though of course Woolf was referring to books).

The second interesting thing is that Fun Home was a massive hit and even got turned into an off-Broadway musical.  Bechdel was clearly somewhat bemused by its success, especially given its subject matter: ‘Fun Home’ refers to the funeral parlour where the family lived and the memoir explores sexuality, marriage breakdown, a fraught father-daughter relationship, grief, loss and death.

Are You My Mother? is about Bechdel’s difficult, often painful relationship with her mother.  It details Bechdel’s attempts to get closer to her mother, to feel worthy of her, and shows her working hard to understand the world from her mother’s point of view by looking closely at her mother’s history.  For having written two almost surgically precise memoirs detailing the most intimate details of the most intimate relationships a person can have, there is no criticism you can level at Bechdel that she has not already levelled at herself.  Time and time again in this book she hurls accusations at herself; that she is self-obsessed, narcissistic and addicted to her own story.  Her two brothers don’t want to talk to her anymore (she said that in the talk, they don’t really figure in this book).  In the book her mother is shown as being clear that she doesn’t approve of the memoir-writing and doesn’t want to hear anything about it; she wishes Alison was using her (quite frankly genius-level) talents for some other purpose.  Partly it’s that the mother doesn’t want Alison to ‘go on’ about her sexuality, but mainly she doesn’t want the family washing laundered in public.  Bechdel responds by noting a) that she can’t help herself and b) that maybe such incredible personal detail will somehow help other people unravel the knots in their own lives: i.e. be so singular it comes out the other side and becomes universal (I think is how the argument goes).

Bechdel goes back and forward in time in this book, exploring her own childhood and her mother’s early life .  In the present-day sections Bechdel has daily conversations with her mother which are sometimes transcribed word for word.  Her mother does all the talking; mainly literary gossip – some of which was so interesting I looked it up (e.g. Julian Barnes criticising Joyce Carol Oates for writing a memoir of grief and widowhood without mentioning that she had remarried straight after the year she was writing about).  The book also follows Bechdel’s study of the work of Don Winnicott (whose approach and theories she likes so much she wants him to be her mother).  Her relationships with her girlfriends and therapists provide related story-strands as do Virginia Woolf and To The Lighthouse.

All this, and I haven’t even mentioned the fantastic graphics!

Bechdel is a person who spends a lot of time in her head and mediates most of her experiences through writing/drawing and reading.  She is also extremely likeable, and (I wanted to say to her mother) a daughter to be proud of.  She is honest, sensitive and funny, not self-obsessed and certainly not narcissistic.  Think of hers as an examined life – and that’s a good thing.  There was, towards the end, a bit too much about therapy/psychology for me, but overall it was an absorbing read; I felt privileged to be invited into the inner life of such a nice human being.

For people who haven’t tried a graphic novel before, Alison Bechdel might be a  good place to start.