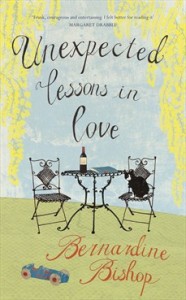 Cecilia has a son, Ian, from her first marriage.  Ian’s a spoilt but basically sound forty-year-old journalist with a loving and competent journalist girlfriend called Marina (who Cecilia likes but admits to being slightly jealous of).  Ian turns up one day on Cecilia’s doorstep with a baby called Cephas.  Cephas was the result of a brief and totally misguided fling Ian had had with a barking mad beauty called Leda.  Leda has disappeared somewhere and Ian has been left holding the baby.  Would Cecilia look after it?

And so we are wound into Cecilia’s life.  As well as Helen, Ian, Marina and baby Cephas there is Tim, her good-natured but hopeless-for-a-gossip husband, a gorgeous ancient nun called Sister Diana and Thor, Cecilia’s personable cat (who Cecilia suspects she loves more than she loves her husband).  Colostomy friend Helen is initially just a planet circling around Cecilia’s busy and peopled life, but then her own story grows as she (grudgingly at first) starts to visit her long-forgotten mother in an old people’s home, forges a new relationship with her martyr-ish sister, Marj and embarks on a romance with a much younger (slightly peculiar) man.

Cecilia falls in love with her small grandson, Cephas.  Cephas develops a strong bond with them all, especially with Thor who sleeps suspended over the pram in a special cat net.  But then mad-as-cheese Leda reappears.  Now she’s called  ‘Volumina’.  The men are bowled over by her beauty but everyone sees her as potentially poisonous (will she take Cephas away?)  Everyone, that is, except Helen who watches from the side-lines with shining and gossipy glee.

Bernadine Bishop was a psychotherapist until cancer forced her into retirement.  To an extent, Cecilia’s story is her story.  Bishop’s insights into human nature are unvarnished and, I think, spot on.  I know this shouldn’t be a surprise, she was a psychotherapist after all, but still, she seems a very down-to-earth sort of psychotherapist to me.  There is a lot of stuff about infant bonding but not in an annoying lecturing sort of way.  Mainly it’s just like a very wise, ironic person is writing.  She is incredibly frank about cancer ‑ the practicalities of a colostomy and the effect cancer has on sex (at one stage Cecilia wonders if she even has a vagina after all the treatment she has had in that area).  She is also frank about fear and about the evil twin that lurks in all our hearts no matter how much we try to hide it.  Actually there isn’t much hiding, the characters in this book seem to relish exposing their own dark underbellies:

“Helen couldn’t help being pleased that in some ways her new friend was worse off than herself [cancer-wise].”

“It was difficult for [Ian] to feel guilty towards his mother, because of his lifelong feeling, corroborated by her, that her resources were his resources.”

“At this moment [Cecilia] felt Marina was taking a position of wisdom and restraint, the kind of position Cecilia had got used to occupying, or finding attributed to herself; and this put Cecilia’s nose slightly out of joint.”

Everyone is satisfyingly complicated.  Even barking mad Leda/Volumina is not left just, well, barking.  She gets a whole backstory to herself in which we meet her bewildered, very posh parents ‑ her father gruff, clueless, her mother heartbreakingly batty, feeding birds and saving snails in the dewy grass before sunrise.

The cancer story pulls along underneath all the (often comical) action.  We get scares on both Cecilia’s and Helen’s behalves.  Sometimes I found myself holding my breath.

This book was nominated for the Costa Book Award in 2013 (won by Hilary Mantel).  It’s a beautiful, humane, and funny read.  It offers consolation.  I really loved it.  It was sad to see that Bernadine Bishop died 6 months or so after publication.  I think this book is a very fine legacy.